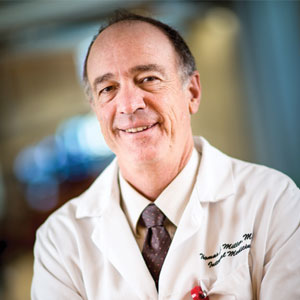 It was in Prague, a city dating back to the 9th century, where inspiration initially struck for a digital innovation aimed at serving patients at University of Utah Health. On a family vacation, my wife and I used an online travel site for the first time. In this case, it was Trip Advisor and it was transformative. My family had information, at our fingertips, on which to base our decisions. That vacation went more smoothly than any previous trip because we weren’t forced to spend the usual amount of time making plans, booking reservations, and leafing through guide books. The younger generation—my daughters-- were especially wowed.

Thus, University of Utah Health became the first health care system in the country to post unedited online physician reviews, and comments, from patients. That innovation boosted our reputation for a high level of patient satisfaction and it has been a prominent factor in a nine-year string of top-ten placements in Vizient’s annual Quality Rankings for the nation’s top academic centers. Since we began our online review process, we’ve seen the number of page views for physician information skyrocket. Our online reviews went live in December of 2012. A year later, traffic to physician profiles had more than doubled. In the year leading up to the innovation we recorded 681,914-page views. In the last 12 months, until November 2018 there were 2,262,094-page views. Any digital marketing strategist would flip handsprings for that kind of growth.

The decision to move patient-review data from behind a firewall gave health care consumers a powerful tool to make informed decisions about their physicians. There have long been commercial vendors with sites for ratings and comments but there is no way a reader knows if those opinions truly come from patients. All are anonymous. The surveys could very well come from a provider’s spouse, or neighbor, or colleague or competitor or even from the provider himself.

One goal of ours is to be as transparent as possible. University of Utah Health only publishes reviews of doctors who have worked six months within the system and accumulated at least 30 surveys. That’s far more than the “shop-a-doc” sites, making ours ring truer for consumers. We don’t edit comments. The public is not foolish, people are going to be distrustful if there is not a wide spectrum of comments. We see negative comments as an opportunity to improve. We want to be held accountable. And, as for the positive comments? They’re far more effective and affordable than advertising.

To continue the business metaphor, our online reviews have paid dividends. The transparency not only gives patients more information but encourages providers to change behavior. When confronted with data, physicians have two options. They can ignore it, or they can own it and, if needed, make changes to improve. Most of our faculty intuitively chose the latter.

Patient satisfaction scores improve every year. When we started, we had only 1 percent% of providers in the 99th percentile. That climbed to 25 percent% by 2013 and has maintained ever since. For 2017,24 percent% were in the top percentile.

Other health centers have started going public with their reviews and have sought our expertise on making it happen. At the US News Healthcare of Tomorrow National Leadership Conference I attended last month in Washington, DC, it was reported that between 125 and 150 medical programs are now online. That amounts to 10 percent% to 15 percent%of all programs in the United States. It cannot be done by just flipping a switch. A medical operation must put an infrastructure in place, to accomplish the conversion. University of Utah Health partners with Press Ganey to survey our patients.

Looking to the future: Ultimately, we would like to offer patients’ satisfaction reviews on long-term outcomes. The surveys we use now are well-designed to assess how well providers are doing in- the-moment. They judge accessibility and whether a physician gets patients involved in their treatment plan. We’d like to know how patients review knee surgery, one year later, for example. But those are not easy to measure. Ideally, we want to establish a process for measuring our clinical success once a patient’s life goes on.

The New Bridges and Barriers to an Integrated World view

Data Literacy –What is it and Why Should Your Company Care?